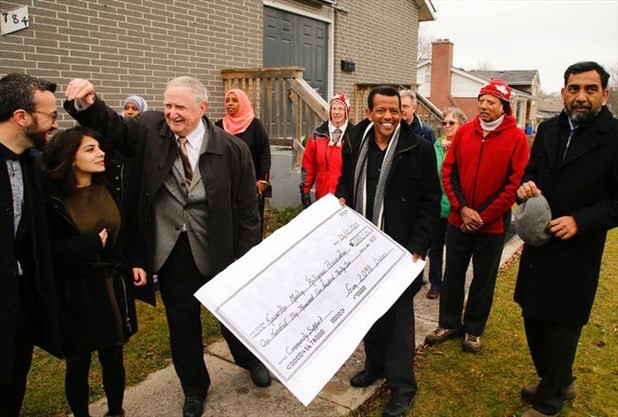 Following the deliberate burning of Masjid al Salaam, Peterborough’s only mosque, the community came together to show support and solidarity for the members of Kawartha Muslim Religious Association (KMRA) in many ways, including a crowd funding campaign that raised more than $110,000 in 30 hours.

Motivated in part by the Community Foundation’s 2015 Vital Signs® report focused on belonging and inclusion and with the agreement of contributors to the campaign, mosque president Dr. Kenzu Abdella approached the Foundation about using the surplus donations to establish a fund which would meet the needs of vulnerable women and children. He described how “…this crime was intended to create fear, division and hatred but it had the opposite effect. We believe strongly that something remarkable has come out of this tragedy in the form of overwhelming community solidarity.” An initial grant of $28,500 was presented to Five Counties Children Centre to enhance the independence and enrich the quality of life of children with physical or developmental disabilities. Another $28,500 was presented to the YWCA Crossroads Shelter to provide more than 700 safe nights for women and children fleeing abusive situations.

The remaining $20,000 was invested with the Community Foundation as the core of a permanently endowed fund which KMRA continues to build and which supports the YWCA Crossroads Shelter and Five Counties Children Centre with ongoing annual grants.